The P26/40 (also known as the P40) was the only heavy tank built by Italy during World War II, although in terms of weight (26 tonnes) was more akin to other countries' definition of a medium tank. Armament consisted of a 75-mm gun, the only Italian tank to mount a weapon of that caliber, and which made it more than adequate in terms of firepower by mid-war standards. The hull shape strongly resembled that of the M13/40, but experience against the Soviet T-34 prompted a redesign with more sloped armor which reached 60 mm at its thickest. It's main limitation in terms of protection was the continued reliance on riveted hulls, which were less effective than welded or cast designs. As such, although the P26 fared well against British anti-tank guns such as the 2-pdr, it was vulnerable to the 6- and 17-pdrs. Mechanically the P26/42 was sound, but suffered somewhat in rough terrain. Production commenced in 1943, shortly before the Italian surrender and as a result, few were placed in service and most were used for static defense (including those taken over by the Germans).

As the designation suggests, design of the P26/40 began in 1940 but the first prototype was not ready until 1942, with production commencing the following year. No other variants were built 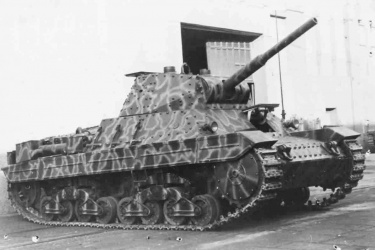