The Matilda I (A11) was the first of a series of infantry tanks. According to pre-war British Army doctrine, infantry tanks were to support the infantry while the faster cruiser tanks would engage enemy armor. As such, infantry tanks focused on heavy armor protection at the expense of armament and speed as it was deemed unnecessary to be faster than infantry on foot. The the Matilda, designed by Sir John Carden, was also developed with a limited budget in mind, and cut many corners such as using a commercially-available engine and transmission, as well as other mechanical features from existing light tanks. This affected reliability and effectiveness, not least by having just two crew members. Armament, however, was the Matilda's main weak point as its 12.7-mm machine guns made it all but worthless as a tank killer even though it was mostly invulnerable to the early Panzers as well as anti-tank guns. Matildas were in widespread use with the British Expeditionary Force in France but most were lost during the campaign or left behind at Dunkirk. After the defeat, they were retired from service and replaced by the more powerfully armed Matilda II.

The prototype of the A11 Infantry Tank Mark I, Matilda I was developed as early as 1936 and first ordered in April 1937, with deliveries beginning the year after. No variants were produced. 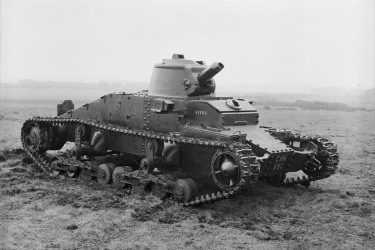