The Leclerc, initially begun as a Franco-German collaboration, was therefore the answer to the AMX-30's shortcomings in terms of weak protection, providing the French Army with its first third generation tank. Despite having a traditional tank layout, the Leclerc is unique in featuring an auto-loader for its 120-mm smoothbore gun, something generally shunned by NATO tanks due to its slower rate of fire compared with manually-loaded guns. Nevertheless, the gun's long muzzle gives its depleted-uranium or tungsten APFSDS rounds extra velocity and it is able to use US and German ammunition for added commonality. Passive protection is provided by welded steel and modular composite armor, but semi-reactive explosive materials are also included in later upgrades. Like most modern tanks, the Leclerc is also fitted with NBC protection, deep-fording equipment and advanced optical and ballistic equipment. The Leclerc has yet to see active combat, although it has been used in various peacekeeping operations including Kosovo (KFOR) and Lebanon (UNIFIL). The only export customer has been the United Arab Emirates whose units feature numerous enhancements for use in tropical climates.

Following the breakdown of collaboration with West Germany in December 1982, the Leclerc (occasionally referred to as the AMX-56) prototype was seen in 1989, entering service in 1992, just missing out on the Gulf War. It has been produced in three blocks, of which Block I was the basic initial variant for use in Central Europe. This was followed by the Block II with a climate-control system, enhanced software and add-on armor. Lastly, the Block II+ has more advanced equipment and the ICONE battle management system. The DNG (Depanneur Novelle Generation) is an armored recovery vehicle based on the Leclerc chassis. 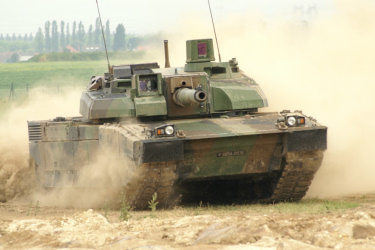