The Carro Armato L6/40 was Italy's main purposely designed light tank of the war, although in terms of weight many of its medium tanks would be classified as such as well. It was developed from a pre-war export-oriented design. Like most Italian armored vehicles of the time, it was built with a riveted hull and turret, with an otherwise conventional design featuring the driver at the front right, and the other crew member manning the small turret, which was offset slightly to the left. Armament was relatively light, involving a Breda 20-mm cannon, plus a co-axial machine gun. This gave it negligible anti-tank capability, although a subsequent anti-tank variant was also developed. The L6/40 was designed to replace the CV33 but it was already largely obsolete when the war began. Still, it was used in North Africa, Italy, and Russia where they were the main tank fielded by the Italian Army despite its even greater inadequacy against Soviet tanks than against British ones in the desert. A small number were taken over by the German Army after the Italian surrender and some remained in service post-war with militia units until the early 1950s.

The Carro Armato L6/40 was developed as a private venture for export after which the Italian Army expressed interested and adopted it. There were no variants of the basic tank version, although a command vehicle was developed with radios and an open roof. The Semovente L40 tank destroyer was developed from the L6/40 hull and is described separately. It was armed with a 47-mm gun. 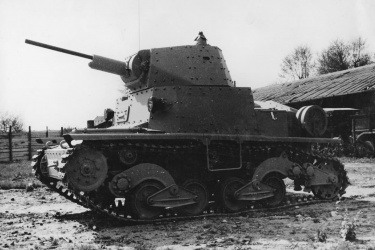