The Humber Light Reconnaissance Car (nicknamed 'Humberette' and 'Ironsides' in reference to General Edmund Ironsides) was wheeled recon vehicle based on the company's own 1938 Super Snipe passenger sedan. It was originally designed with a 4 x 2 configuration with drive only to the rear wheels, and with light armor which benefitted from some noticeable sloping aside from the open top although an armored roof was provided in later variants. Defensive armament typically consisted for a Bren gun as well as a Boys anti-tank rifle. Performance was mixed, with the main benefit being superb road speed (faster than most other British armored cars) but at the cost of slightly reduced range. This speed made them highly effective for closing in on enemy positions and being able to escape. Humber LRCs first saw action with the Reconnaissance Corps in Tunisia and later went on to serve with British, Canadian, and Czech forces in Italy and Northwest Europe, although by the end of the war were regarded as being largely obsolete. A few were also used as VIP cars, for use by cabinet ministers and the royal family. A similar Canadian-built version was known as the Otter.

The initial production version was the Humber Light Reconnaissance Car Mk. I which was distinguished by its open top and 4 x 2 drive. Production soon switched to the Mk. II which introduced an inclosed roof. The final variant was the Mk. III which incorporated a 4x4 drive, with further modifications in the Mk. IIIA in the form of slightly thicker armor and additional viewing ports. The VIP version was known as the Ironside Special Saloon. A similar Canadian-designed version was developed from the Humber LRC and known as the Otter. It was built by General Motors Canada and based on the Canadian Military Pattern truck. 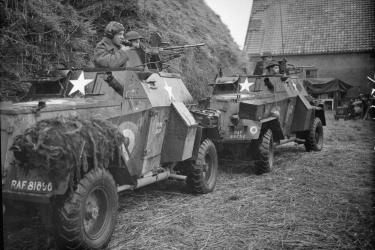