The Karrier Humber Armoured Car was the most widely produced armored car employed by the British Army and Commonwealth forces during World War II. The design was based on the company's own KT 4 artillery tractor chassis (with the engined moved to the rear) mated with a body based on the Guy Armoured Car. Nevertheless, the name Karrier was dropped in order to avoid confusion with the Universal Carrier and instead used the name of Humber, both companies being part of the Rootes Group. Guy was also responsible for the turret and hulls. The Humber strongly resembled the Guy armoured cars that preceded it and consequently inherited many of its flaws. Handling was not great, early versions suffered from manufacturing defects with its armor (which offered only modest protection against small-caliber fire) and the twin BESA machine gun configuration was largely ineffective against enemy fighting vehicles. However, the design showed room for considerable improvement, with many of its flaws rectified in later variants. Additionally, the turret mount had room for upgrade which eventually allowed it to be equipped with a more respectable 37-mm gun. Humbers were first used in action during the North Africa campaign in late 1941 after which they were employed extensively by British and Canadian recon units in Italy and Northwest Europe. Most remaining units were sold off post-war to British allies which included Cyprus, Denmark, Egypt, India, Mexico, Netherlands, Portugal, and Sri Lanka.

The initial Humber Armoured Car Mk. I was based on the Guy Armoured Car which it strongly resembled and featured a three-man crew. It was followed by the Mk. II with some revisions to the turret and hull, notably the frontal armor which had the slope extended to the top. The Mk. III introduced a larger turret which allowed the incorporation of a wireless operator. Some had a dummy gun in order to fit a higher powered radio for use as a communications vehicle. Finally, the Mk. IV used a US-built M5 or M6 37-mm gun giving it some degree of anti-tank capability. Non combat variants included the Mk. II OP observation post and Humber AA Mk. I anti-air vehicle with four 7.92-mm BESA machine guns. 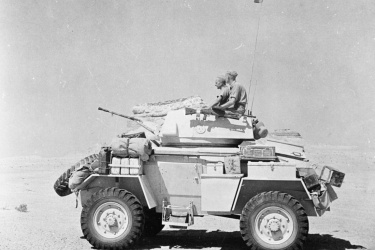