The Fennek ('desert fox') is a joint German-Dutch collaboration to produce a light armored reconnaissance vehicle built around modularity to enable it to undertake other roles. It features a selectable 4 x 4/4 x 2 design along with a central tire pressure regulation system for better operation in different terrain conditions. In its original reconnaissance configuration, the Fennek is based around a prominent, extendable observation mast which includes numerous sensors such as a thermal imager, laser rangefinder, and camera, to which is added an inertial navigation system and GPS (and miniature Aladin UAVs in German versions). If necessary, the sensors can also be removed from the mast and be operated by dismounted crew. The Fennek's welded aluminum hull provides protection against small arms fire in addition to NBC protection. Defensive armament varies but typically involves either a 7.62- or 12.7-mm machine gun but ATGMs and automatic grenade launchers can also be fitted. Despite some initial production issues (the Dutch firm originally involved in the partnership, SP Aerospace, went bankrupt in 2004), the Fennek has since gone on to equip both German and Dutch Army reconnaissance units and it has seen service in Afghanistan with both countries as part of ISAF operations. Despite its capabilities, it has only found one export customer, Qatar.

Prototype of the Fennek was completed in April 2000 with deliveries beginning in 2003. In German service it is known as the Leichter Gepanzerter Spähwagen (or LGS Fennek) and can be optionally fitted with a GMG 40-mm automatic grenade launcher or an MG 3 machine gun. Dutch variants can be fitted with Spike or MRAT ATGMs or a 12.7-mm gun while the Fennek SWP is a version fitted with a Turkish-designed PMADS turret with twin Stinger SAM launchers (each capable of launching two missiles). 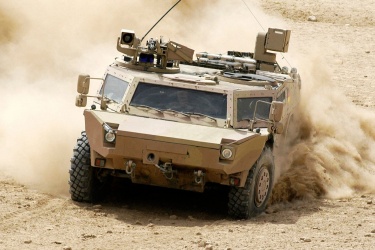