Along with the H-35 and the R-35, the FCM-36 was one of a trio of light tanks designed for the French Army's infantry arm. Compared to its three contemporaries, the FCM-36 was the fastest, and this was the main reason why it was selected for production despite being more expensive than the others. Visually, the FCM-36 stood out as a result of its more prominently sloped welded armor, on both the hull and the turret. The latter was a unique FCM design that was larger than the AMX-R turrets used in the R-35 and H-35, but remained operated by a single crew member. The relatively thick armor and heavy slope made it highly resistant to most German rounds and gave it a rather futuristic appearance. However, armament was weak; it was armed with a short-barreled 37-mm SA18 gun since the longer-barreled SA38 (more effective in the anti-tank role) was given as a priority to other designs. The tank also had a provision for a radio but few were fitted in practice. These limitations hampered its battlefield effectiveness and the fact that it was built in only small numbers meant that it had little impact on the campaign against the Germans, who ended up using and readapting surviving examples.

A requirement for a new light tank for the infantry resulted in three competing designs, one of which was the FCM-36. An initial prototype was delivered in April 1935 but teething troubles plus delays in getting the tank into production due to preference for the R-35 and H-35 resulted in all 100 examples being built shortly before the war began. 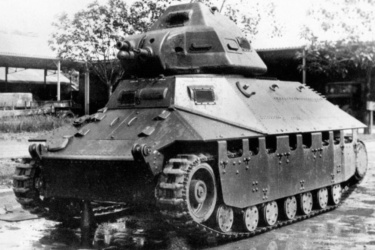