The Dardo is Italy's first infantry fighting vehicle, built concurrently with other AFV designs such as the Ariete MBT and Centauro tank destroyer. The Dardo features a conventional IFV layout, built of all-welded aluminum but with the option of an additional layer of ballistic steel armor if needed. It's main innovation is the Oto Melara TC-25 HITFIST turret, which although designed for two crew members, can be operated by just one. The turret houses a stabilized Oerlikon Contraves 25-mm KBA cannon but additional anti-tank capability is provided by twin TOW launches, one on each side of the turret. The troop compartment is at the rear and can fit as many as six infantrymen who enter and dismount through a power-operated rear ramp. These are provided with five firing ports and an associated vision block. A roof hatch at the top also permits reloading the TOW missile launchers from inside. Other features of the Dardo include passive night vision equipment, NBC protection and a laser-warning system. Since its introduction in the early 1990s, the Dardo has been deployed to Iraq as well as Afghanistan but otherwise has not been exported.

Development began in 1982 with the first VCC-80 prototype ready in 1988. This did not feature the TOW launchers. Production Dardo vehicles featured the HITFIRST turret and is the only main variant. 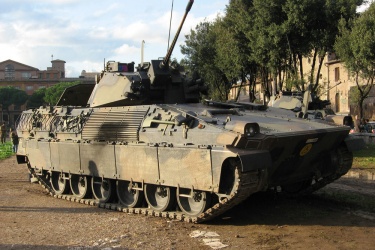