Designed pre-war as part of an effort to motorize the British Army, the Daimler Dingo (originally known as the Daimler Scout Car) became one of the most outstanding wheeled AFVs of World War II and the most widely produced British armored or scout car. The Dingo originated from a pre-war requirement for a scout car used for recon and liaison duties, with proposals from Alvis, Morris, and BSA, the latter winning the contract for its Daimler subsidiary although it was the name of the Alvis design (Dingo) that was eventually adopted. The Dingo featured a two-man crew with relatively thick armor for its size (up to 30 mm), a low and wide chassis for improved off-road performance, and a large fuel reserve which gave it the necessary endurance for long range missions. The transmission was a Daimler speciality from its civilian designs, consisting of a pre-selector gearbox, fluid flywheel, and four-wheel steering (although this was later changed to front-wheel steering to ease operation). The Dingo was in service when the war began and first saw combat with the British Expeditionary Force in France in 1940. They equipped British, Commonwealth and Allied forces throughout the remainder of the war and it is a testament to its excellence that no replacement was felt needed until the 1950s. Dingos were often seen as the the command vehicles of high ranking officers. Production of a vehicle based on the Dingo, the Lynx was also undertaken by Ford in Canada, and it was also copied by Italy.

Testing of prototypes took place in August 1938 with orders beginning in May 1939 for what was known as the Car, Scout, Mark I, later renamed Daimler Scout Car though better known as the Dingo. Changes to the original Mk. I version led to the Mk. IA with a folding roof, and Mk. IB with revised cooling and radiator grills. The Mk. II introduced front-wheel steering in order to improve handling, while the Mk. III featured a waterproof ignition system. A Canadian version was known as the Lynx and was produced by Ford Canada. It featured the Dingo hull on a revised chassis with a conventional gearbox and suspension. The basic Mk. I was followed by the Mk. II with a strengthened chassis and no roof. Finally, the Autoblinda Lince was developed by Lancia in Italy based on captured Dingos. It was used by German and German-allied Italian forces following the Italian surrender. 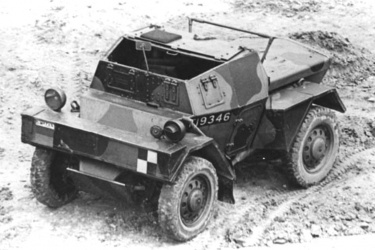