Tankettes were a popular design during the inter-war period and Italy was no exception in producing them, in this case the Carro Veloce CV 33. It was, like most of its contemporaries, inspired by the British Carden-Loyd Mk IVs, of which a small number were built locally. The CV 33 featured an all-riveted/welded hull with some degree of armor protection against small arms. The driver sat at the front right, with the commander/gunner to his left. Armament consisted of twin FIAT machine guns, although a small number were also built with a more powerful 37-mm gun. Aside from the basic tankette designs, there were numerous variants which included a flamethrower vehicle as well as other engineering vehicles; it was also used extensively for towing ammunition and supplies. All in all, the CV 33 was the most widely produced Italian combat vehicle of all time, and despite its obsolesence and limited fighting capability against tanks, saw extensive action in the Balkans, North Africa, Ethiopia, and Russia until the Italian surrender (some remained in German hands).

Italy's first tankette design was the CV 29, a local copy of the Carden-Loyd Mk IV. This was followed by the CV 3 which subsequently resulted in the production CV 33. Initial vehicles, the Series I were armed with just one 8-mm machine gun, but twin guns were mounted on the Series II to which most older units were eventually converted to. Other vehicles included the Carro Lancia Fiamme flamethrower, Carro Radio radio vehicle, Carro Veloce Recupero armored recovery vehicle, and the Passarella bridgelayer. Further improvements lied to the CV 35with a redesigned bolted hull and with a single Breda 13.2-mm gun. In 1938, the designation of these vehicles was changed to L3/33 (CV33) and L3/35 (CV35). 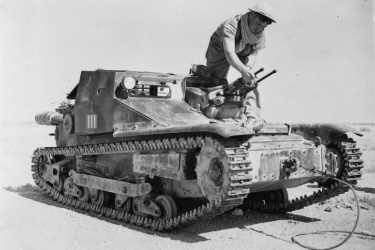