Developed concurrently with the A9, the Cruiser Mk II (A10) shared many similarities to its counterpart including the overall shape but was better protected thanks to the addition of extra plates bolted to the outside hull and turret which gave it a designation of a "heavy cruiser" tank. A prominent change was also the removal of the secondary hull turrets where two of the three machine guns of the Mk I were mounted. Unfortunately many of the Mk Is deficiencies were carried over including the sharing of the driver and fighting compartments, while the extra armor also reduced speed considerably. The result was a tank that was poor in all three measurable categories of speed, armor, and armament, the 2-pounder being too weak against German armor (it lacked an HE round as well). Only a small number of Mk IIs were built as priority was given to its successor, the Cruiser Mk III. Still, it saw combat with the 1st Armoured Division in France in 1940, in the early phases of the North Africa campaign, as well as in the defense of Greece on a more limited scale.

The A10, like the A9, was designed by Sir John Carden in 1934 with an initial prototype (A10E1) completed in 1936. Production began in 1938 and it was accepted into service as the Cruiser Tank Mk II. Only two variants were produced, the Mk. IIa with a designed mount and an extra machine gun in the hull and the Mk. IIa CS with a 3.7-in howitzer as main armament. 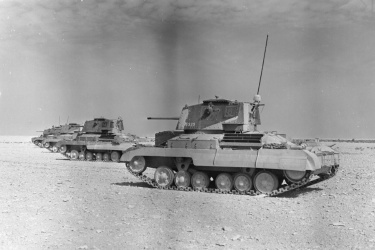