The CAESAR (Camion Equipe d'un Système d'Artillerie) 155 mm self-propelled gun began life as a technology demonstrator by GIAT showing the possibility of installing a heavier gun on a relatively light chassis, thus providing similar firepower to a more expensive tracked SPG. The gun is a 155-mm howitzer made specifically for this chassis, a modified version of a Mercedes-Benz UNIMOG U 2450 6 x 6 truck, and has a larger caliber (L/52) to the 155-mm gun mounted on the AMX-30 AuF1, France's other main SPG. Fire control is fully computerized and it can shoot a quick burst of up to six rounds and move off its position in just three minutes, thus reducing its vulnerability to counter-battery fire. The use of extended range base bleed ammunition gives it a maximum firing range of 42 km. Its relatively low weight also enables it to be air-transportable by medium-sized transports such as the C-130 and C.160, and it can be carried in landing craft as well. Despite its beginnings as a private venture, the CAESAR quickly caught the interest of French authorities which adopted it in the early 2000s. It has since seen extensive combat in Afghanistan, Syria, and Iraq during the Battle of Mosul in 2016-17. It has also been adopted by Indonesia, Saudi Arabia, and Thailand, with various other users currently awaiting deliveries.

First seen as a technology demonstrator in 1994, the CAESAR has not had any major variants built. Chassis can vary depending on user, with some export versions being based on Sherpa (6 x 6) and Tatra (8 x 8) trucks. 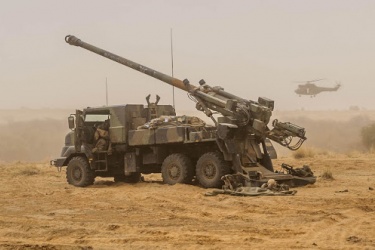