The AS-90 (which stands for 'Artillery System for the 1990s') was developed as a replacement for the 155-mm US-built M109 which was the most powerful self-propelled gun then in British Army service but which by the 1980s was beginning to show its age. It is based around a privately-developed GBT 155 turret from Vickers which was originally intended for export, mounting a FH-70 155-mm 39-caliber howitzer. This can fire a three-round burst in 10 seconds as well as an intense rate of fire of six rounds per minute, or three rounds per minute sustained. Range using standard projectiles is 24 km, although this could be extended to 30 km with assisted projectiles. The AS-90 is built on its specially-designed hull and chassis, which features hydropneumatic suspention which helps lower its profile. Unlike most contemporary vehicles built with aluminum, the AS-90 reverted to an all-welded steel hull for ease of maintenance, and which also provides protection against small arms fire. The AS-90 was first desployed during the 1995 Bosnia and 1999 Kosovo interventions and also saw extensive action during the 2003 Iraq War. It is planned to remain the main British Army SPG at least until 2032.

Design of what would become the AS-90 began as early as in 1982 and gathered impetus following the cancellation of the SP-70 program. No major variants of the original design have been built, although the AS-90D designation is applied to those vehicles modified for desert use. The AS-90 Braveheart was an attempt to equip a 52-caliber gun but never entered production. The turret of the AS-90 has also been used in the Polish AHS Krab SPG. 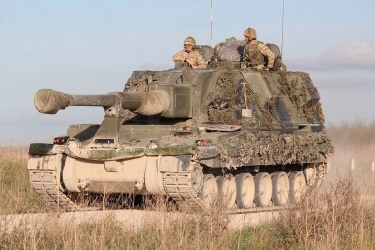