The AMC 35 was one of a trio of light tank designs offered by Renault during the early 1930s. Unique among French tanks was the fact that the AMC 35 featured a two-man turret, as opposed to the one-man turrets that were most common among its contemporaries. Armament was powerful for pre-war standards, consisting of a 47-mm SA 35 gun (or a long-barreled 25-mm SARF anti-tank gun in some units), but armor protection was inferior to other French light tank designs like the R-35 and H-35, and the riveted hull was more vulnerable than the cast hulls of the latter designs. This offset the advantage it had over other French tanks by virtue of its two-man turret which made coordination among the crew easier. The result was that the AMC 35 was produced in small numbers of which a dozen were sent before the war to Belgium. Combat service was limited, the few existing units being rushed to the front with little effect on the outcome.

The Auto-Mitrailleuse de Combat requirement for the cavalry issued in 1931 resulted in an initial prototype armed with a 37-mm gun, followed by the AMC 34 YR with a 25-mm SARF gun. This was essentially a pre-production design before the definitive AMC 35 (also known by its factory designation ACG-1) was developed with a 47-mm SA 35 gun. Captured German units were known as th e PzKpfw AMC 738(f). 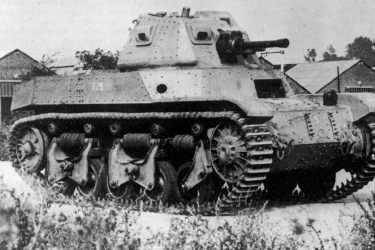