The AEC Armoured Car was unique among vehicles of its kind in that it was designed with the firepower of a tank in order to improve survivability. It was initiated as a private venture by AEC using the chassis of its 4x4 Matador artillery tractor with the turret of the Valentine Mk. II tank. Despite not initially gaining attention, it was famously displayed in 1941 at London's Horse Guards Parade which attracted the interest of Winston Churchill, and production orders soon followed. Modifications from the Matador included moving the engine to the rear as well as a more powerful diesel engine, which made it the only British armored car to use diesel. The vehicle was large and roomy by the standards of armored cars, and this also allowed it to have respectable effective armor thickness thanks to its sloped front hull. However, there was minimal sloping elsewhere. Defensive armament included a Bren gun as well as a co-axial BESA gun on all three turret types used which went from a 2-pdr gun on the initial variant, to a 6-pdr and finally a 75-mm gun which was the same used on Churchill and Cromwell tanks. The AEC saw action in North Africa from late 1942 and was also used extensively in Europe after D-Day. It remained in service post-war until replaced by the Saladin in the mid-1950s.

The prototype was designed and built in 1941 and entered service as the AEC Armoured Car Mk. I with a Valentine Mk. II turret equipped with a 2-pdr gun. The turret was redesigned and upgraded with a 6-pdr gun in the Mk. II and this was followed by the final Mk. III version with a 75-mm gun, this being the largest gun fitted on an Allied wheeled reconnaisance vehicle. An attempt to fit a Crusader AA turret was tested but did not enter production. 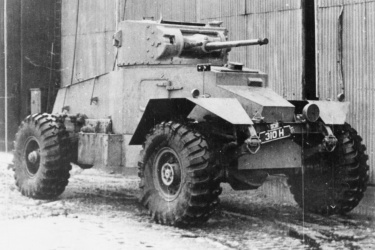