The Autoblinda AB 40 and its variants were the main Italian armored car fielded in World War II. Despite its conventional appearance, the AB 40 had a series of innovations that gave it exceptional performance, particularly in rough terrain. Firstly, all four main wheels were powered and could be driven both forwards and backwards, something that was aided by an extra driving position in the rear. Each side had a spare wheel mounted on a spindle, which allowed it to overcome more difficult and wider obstacles. Armament configurations varied according to each model: the basic version was armed with twin 8-mm Breda machine guns, but successive variants were fitted with increasingly more powerful weapons, namely a 20-mm cannon and later a 47-mm gun which gave it modest anti-tank capability. AB 40s and its successors were used extensively by the Italian Army's cavalry and reconnaissance units, serving in the Balkans, North Africa and Russia. Subsequently some were taken over by the Germans and pro-Axis militias but surviving units were used post-war by the Italian Police.

The prototype AB 39 was built in 1939 and was followed in production by the AB 40 the following year. This followed the Italian tradition of mounting twin 8-mm Breda machine guns in a turret. The subsequent AB 41 was upgunned with a 20-mm cannon and also featured a slightly more powerful engine. The final version was the AB 43 with a 47-mm gun and a co-axial machine gun as well as yet another engine upgrade. All versions also had an extra machine gun in the back of the hull, facing the rear. A munitions carrier was known as the Porta Munizione and lacked the turret. Some components were also used in the AS 42 long-range reconnaissance vehicle used in North Africa. 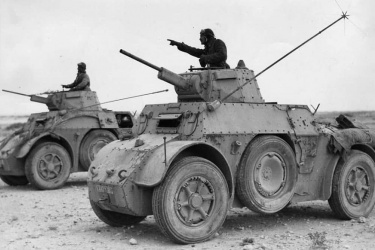