Last and undoubtedly the finest of the Mystère series of fighters, the Dassault Super Mystère was the ultimate evolution of a design which stretched back to the Ouragan. The Super Mystère featured a new wing with 45 degree sweep and an afterburning Atar engine which allowed it to be the first Western European aircraft to exceed Mach 1 in level flight. Despite the fact that it was limited to daytime operations, the Super Mystère had a very extensive service life with the Armée de l'Air where it was found in front line service until 1977, throughout which time it was upgraded to carry more advanced armament such as Sidewinder air-to-air missiles. It was also exported to Isreael which used it to much success during the Six Day War and Yom Kippur War while surplus Israeli examples were later sent to Honduras which also flew them in combat and did not retire them until 1989. Eventually, Dassault would concentrate on a delta wing design, later known as the Mirage.

Developed from the aborted Mystère IVB, the first prototype of the Super Mystère B1 took to the air on 2 March 1955 with Rolls-Royce Avon engines, later replaced by the Atar in the production Super Mystère B2. The final variant was the Super Mystère B4 with even more powerful engines (later used in the Mirage series) but was not produced. Israeli units were equipped with the B2 although they replaced their engines with Pratt & Whitney types. 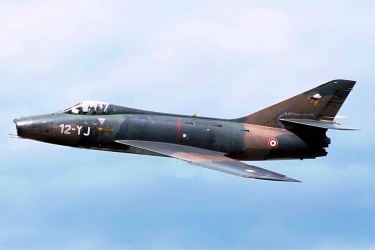