With its rugged exterior and the classic tri-motor configuration of Italian bombers, the Savoia-Marchetti SM.79 Sparviero (Sparrow) was probably the most recognizable and popular aircraft of the Regia Aeronautica. First flown in 1934 as an eight-seater commercial transport, it became a very effective medium bomber and torpedo bomber to the point that over half of Italy's bomber force was equipped with the Sparviero when the war began, and subsequently participated in all theaters where Italian forces were involved in. It's main drawback was a very light bomb load and weak defense but it proved durable and dependable in addition to having the versatility of performing in other roles like reconnaissance and transport. SM.79s were a constant scourge to British shipping in the Mediterranean and it is in that torpedo bombing role that the Sparviero is best remembered, as the stuff of legend in Italy and as a fine example of Italian aviation to the world. Other operators of this excellent aircraft included Croatia, Germany, Romania, Spain, and Yugoslavia.

The prototype SM.71 first flew as a military aircraft on 2 September 1935. Some early units fought for the Nationalists in Spain, these belonged to the SM.79-I variant which was the principal version available when the war broke out. Later, the SM.79-II was developed featuring uprated P.XI radials and was found in large numbers during the campaign in North Africa, after the surrender came the cleaned up SM.79-III which lacked the ventral gondola and had a revised armament configuration. Export versions of the Sparveiro included the SM.79B and SM.79JR, interestingly these were designed with two engines rather than three and were licensed produced in Romania. Among those used for different roles was the SM.79C VIP transport and the SM.83 civil transport which could carry 10 passengers. Lastly, a substantially redesigned version of the Sparveiro was the SM.84 (initially designated SM.79bis) with a lengthened fuselage and twin fins and rudders. 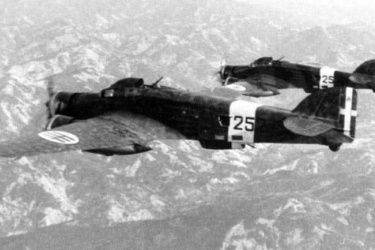