Developed from the MiG-25, the Mikoyan MiG-31 'Foxhound' was designed as a powerful and capable interceptor, built around the then-new Kh-33 (AA-9 'Amos') long-range missile and the Zaslon 'Flash Dance' radar, considered the most powerful radar installed in a fighter at the time. Rumors of a 'Super Foxbat' had emerged following the defection of a MiG-25 pilot to Japan in 1976, though the existence of the MiG-31 was only revealed in 1978. Despite a very similar appearance to its predecessor, the MiG-31 is actually a far more capable aircraft. Its airframe is made of advanced materials such as titanum and nickel steel, it was the first Soviet fighter to have true look-down/shoot-down capability against multiple targets, including cruise missiles and their launch aircraft. Up to four MiG-31s can link their radars to obtain a wider search pattern as well as being operated automatically via a ground controller datalink. It is also the first first aircraft equipped with phased array radar and with the retirement of the USN's F-14 fleet, is the only aircraft currently in service that can fire long-range air-to-air missiles. The MiG-31 has been continuously upgraded over the course of its its service life, including the addition of inflight-refueling probes giving it an endurance of as much as six hours in the air, as well as more advanced avionics and weaponry. Latest variants even have ground attack capability and will be able to carry the Kh-47 air-launched ballistic missile. Over 350 MiG-31s were eventually deployed for the air defense of the USSR and following the country's dissolution, has remained Russia's sole dedicated interceptor. But due to its advanced construction and cost has not been exported although Kazakhstan operates a number of examples inherited from the USSR. Despite its deployment into war zones, the MiG-31 has not been engaged in combat; rumors of a recent sale to Syria proved untrue.

The prototype first flew on 16 September 1975 with the designation Ye-155MP or MiG-25MP suggesting a direct link with the MiG-25 despite being an entirely new aircraft. The initial production variant MiG-31 'Foxhound-A' entered service in 1981 and accounted for the majority of production. The MiG-31M 'Foxhound-B' was a significant upgrade featuring digital flight controls and modern multifunctional CRT cockpit, but production was cancelled due to funding difficulties after the dissolution of the USSR. Instead, development continued with the MiG-31DZ with terrestrial radio navigation system. A more sophisticated variant was the MiG-31B with an inflight-refueling probe plus new avionics and ECM equipment. Earlier aircraft converted to -31B standard (minus the refueling probe) were known as MiG-31BS. Finally, the latest and most advanced version is the MiG-31BM (all conversions) which has increased radar detection range, improved automatic tracking, and can be equipped with air-to-ground weapons as well as even more advanced air-to-air missiles. Some have been modified to be able to carry the Kh-47 hypersonic ballistic missile and are designated MiG-31K. Conversions of -31BS aircraft to near -31BM standard (including refueling probe) are known as MiG-31BSM. 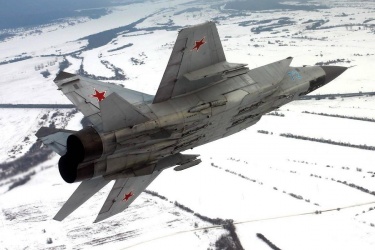