The successor to the MB.326 trainer/light-attack aircraft was the Aermacchi MB.339 which bears a strong superficial resemblance to its predecessor with the same unswept wing configuration with wingtip fuel tanks. Yet despite the airframe commonality, the MB.339 was a considerably superior aircraft with better overall performance and handling although it still suffers in comparison with similar designs such as the Hawk or the Alpha Jet. Initial trainer variants had secondary ground-attack capability although it would not be long before a dedicated close support version was designed and deployed. Besides the Aeronautica Militare which is its main user (employing around half of total production), the MB.339 has been exported to Dubai, Eritrea, Ghana, Malaysia, New Zealand, Peru and Argentina, the latter which used it with some success in the Falklands War.

The first MB.339X prototype flew on 12 August 1976 and entered production as the MB.339A trainer with optional weapons capability. It was then decided to build a single-seat dedicated attack version known as the MB.339K but the improvements over the earlier MB.326K were not significant enough to warrant production (especially considering the existence of the more advanced Alpha Jet and Hawk). Many of these equipment upgrades were eventually applied to the MB.339C, first ordered by New Zealand and later by Eritrea, which can be equipped with Sidewinder and Maverick missiles among other stores. 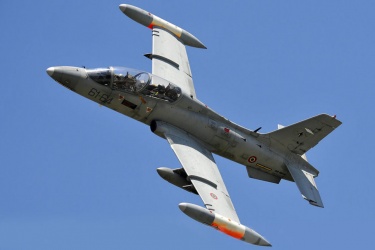