The Kawasaki Ki-48 'Lily' was one of the few light bombers developed by the IJAAF during the war, it was specifically designed as a counter to the Soviet SB-2 which was employed by China during the Sino-Japanese War. The Ki-48 saw extensive service as both standard and dive bombers during the early campaigns in Southeast Asia and its performance was generally considered to be adequate for its task although its payload was rather light for a bomber of its size (even most Allied fighter-bombers carried a much bigger load) and its armament insufficient to defend it once the Allies began obtaining air superiority in most theaters. By this time, the Ki-48's operation was limited to places where it could fly unopposed, or at night. It was retired from service in 1944 although many still functioned as a suicide craft or as a test bed for missiles and turbojets.

The prototype Ki-48 first flew in July 1939 and entered service the following year as the Ki-48-I whose subvariants, the Ki-48-Ia and -Ib, had only minor equipment differences . The only other production variant was the Ki-48-IIa which had increased overall performance thanks to an upgraded powerplant and a lengthened fuselage in addition to extra armor protection. Some units were modified with dive brakes under the outer wing panel and were known as the Ki-48-IIb dive bomber, while the Ki-48-IIc increased its defensive armament. Lastly, the Ki-48-II KAI was a suicide conversion with 800 kg of explosives. 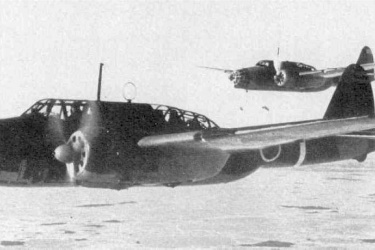