The Nakajima Ki-27 'Nate' had the distinction of being the IJAAF's first monoplane fighter to enter service during the mid-1930s. Like most Japanese aircraft it was extremely maneuverable, so much it is considered to be the most agile monoplane fighter ever built proving that Japanese technology was finally capable of producing an advanced machine despite the existence of a number of significant limitations in the form of a fixed undercarriage, poor engine, and weak defensive armament. This relegated the Ki-27 to secondary importance after the war in the Pacific broke out but nevertheless it was seen in large numbers during the early operations over the Philippines, Malaya, and the Dutch East Indies. It continued to be encountered as late as 1943 in the interceptor role while some were used as kamikazes during the final battles. Other users included the puppet state of Manchukuo and Thailand.

The Ki-27 prototype first flew on 15 October 1936 and entered production as the Ki-27a. It was built well up until 1942, by which time there were plenty superior designs on the drawing boards. The ultimate production variant was the Ki-27b with minor improvements to the original, among which was a revised clear vision cockpit canopy and the ability to carry underwing bombs. Other developments included the lightweight Ki-27-KAI as well as a number of converted aircraft used for training purposes. 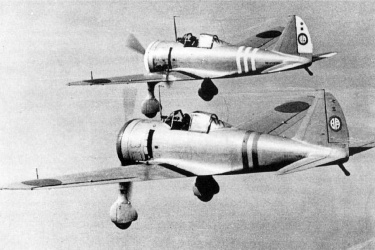