The Xian JH-7 'Flounder' (also known as the FCB-1 Flying Leopard) is China's first purpose-built fighter-bomber which began as two separate requirements for the PLANAF and PLAAF. In the event, the PLAAF version with side-by-side cockpits (similar to the F-111 and Su-24) was abandoned while the naval version with more conventional tandem layout went ahead. The JH-7 was also planned to be equipped with a reverse-engineered versión of the Rolls-Royce Spey engine, unfortunately problems with this undertaking meant that the aircraft would be delayed for a number of years entering service only until the early 90s (and with the PLAAF even later). Overall the JH-7 is a fairly decent naval strike aircraft albeit underpowered and with a smaller payload than other similar aircraft like the Tornado, factors which may limit its use given the recent introduction of more capable aircraft like the J-10 and J-11.

The maiden flight of the JH-7 was on 14 December 1988 and entered service exclusively with the PLANAF in 1994 although production was minimal due to engine problems. A major improvement resulted in the JH-7A, these include additional Spey engines purchased from the UK as well as the possibility of domestic license-production. The JH-7A also features an improved avionics set and additional weapons such as laser-guided bombs. An export version is known as the FBC-1 Flying Leopard but has yet to find a suitable customer. 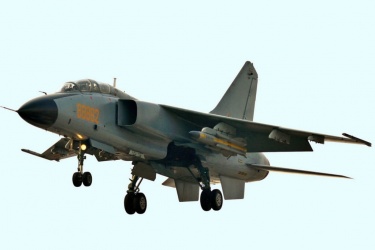