Brainchild of Jiro Hirikoshi (the creator of the Zero), the Mitsubishi J2M Raiden (Thunderbolt) was intended as a fast interceptor, sacrificing maneuvrability and handling for speed and climb. Designed before the start of the war, it entered service only until late 1943 because of serious engine problems as well as priority in developing the A6M Zero and was eventually used primarily for homeland defense against the B-29s. Pilots disliked the poor visibility but its firepower proved quite adequate to the task of bomber interception and therefore was quite successful in its role despite the fact that it was prone to endless snags and crashes. Unfortunately, it was built in too few numbers to cause any significant impact and was gradually dropped in favor of the N1K Shiden although some were also used over the Philippines. Ironically, post-war evaluation by the Allies was considerably more favorable than their own.

The prototype J2M1 flew of the first time on 20 March 1942, over three years after it was initially conceived. Production J2M2s suffered from engine problems at first and entered squadron service only until December 1943, a year after first being delivered. They were later replaced by the J2M3 which was armed with four 20-mm cannon mounted on the wings but suffered from reduced performance, thus some were armed with two upwards firing cannon. Final versions were known as the J2M4 and J2M5 and featured more powerful engines to overcome these limitations. 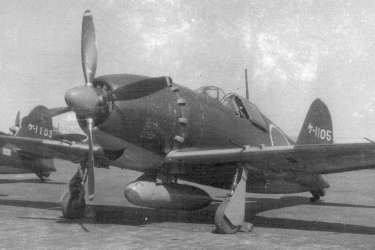