The Shenyang J-5 'Fresco' was China's first attempt at producing a jet fighter, in this case the Soviet MiG-17. The Chinese aircraft industry roughly began during the Korean War where there was some domesic production of MiG-15 parts and thus it was logical that the next step would be full production of a similar aircraft. In the ensuing chaos of the Cultural Revolution, full-scale production was delayed until the mid-1960s by which time the J-5 was practically obsolete and awaiting a replacement. Nevertheless it achieved noteworthy export success with countries such as Albania, Bangladesh, North Korea, Pakistan, Sri Lanka, Sudan, Tanzania, Vietnam and Zimbabwe which valued the J-5's simple design and cheap cost even compared to its Soviet counterparts. Currently out of service with the PLAAF (although a couple of hundred remained operational at the end of the Cold War), trainer versions are still in use.

The J-5 made its first flight on 19 July 1956 and was directly based on the MiG-17F. Later, the J-5A was developed, based in turn around the MiG-17PF and equipped with radar giving it all-weather capability. Ironically, the most widely produced variant was the JJ-5 tandem two-seat trainer built by Chengdu, over 1,000 were built and many are still in service today. Export versions of the J-5 are known as the F-5, with trainers designated FT-5. 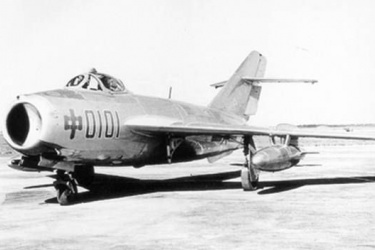