The importance of maritime patrol was never underestimated by the Japanese, and one of the two long-range flying-boats available when the war began was the Kawanishi H6K 'Mavis'. With its superior range and incredible endurance of 26 hours, the H6K was widely employed for maritime reconnaissance as well as a long-range bomber where it was quite successful during the opening phase of the war. However, it suffered from underpowered engines and poor defensive armament which made it quite vulnerable to Allied fighters which grew ever more numerous as the war progressed. It was eventually employed mostly in secondary roles such as for transport and communications duties (some in civil guise with Japan Air Lines) where its range was more than adequate for the long distances of the Pacific. It was eventually replaced by the considerably superior H8K 'Emily' after 1943.

The prototype H6K1 made its maiden flight on 14 July 1936 and entered production as the H6K2 in 1938 with more powerful engines. The main production variant was the H6K4 which featured additional fuel capacity and defensive armament, this was increased even more in the final and definitive H6K5 variant. Additional models were also developed, these included the H6K3 armed VIP and staff transport and various unarmed passenger transports known as the H6K2-L and H6K4-L which were based on the similarly designated reconnaissance versions. 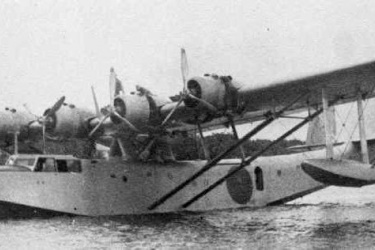