Successor to the G.50, the Fiat G.55 Centauro (Centaur) was a much more radical design and despite its late appearance is regarded as the finest Italian fighter of the war, and a match for most Allied aircraft of its time. Key to its improved performance was the addition of a license-built Daimler-Benz DB605A inline engine, giving it a sleek appearance as well as attractive flight characteristics: in combat, it was considered superior to the MC.205 and a great high-altitude fighter in its own right. Unfortunately, the aircraft appeared only until 1943 shortly before the Italian surrender, and since the production facilities of the G.55 were located in Turin most of the surviving units served with the pro-German Aeronautica Nazionale Reppublicana. Incredibly, post-war production continued (mostly for export) and were used by Italy, Argentina, Egypt and Syria.

The prototype G.55 first flew on 30 April 1942 and production commenced in 1943. The initial production version, the G.55/I, had been delivered to just one squadron when Italy surrendered and did not see combat with the Regia Aeronautica. Later proposed variants included the G.55/II with five 20-mm cannons, the G.55/S torpedo bomber, and the impressive G.56 with a powerful Daimler-Benz DB 603A which gave it performance superior to the Bf 109G or Fw 190A. Post-war export versions were designated G.55A and G.55B (two-seat trainer). 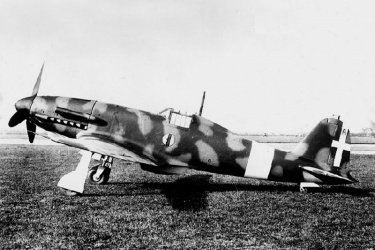