The Etendard series of aircraft had been developed as part of a NATO light attack fighter competition which Dassault subsequently lost to the Fiat G.91. Out of all the models, the Etendard IV was the only one to have been built in significant numbers, entering service in the 1960's as a carrier-borne fighter with strike capability. In spite of performance which was not particularly impressive, the Etendard IV saw widespread use in the French Aéronavale until it was replaced by the similar but considerably more capable Super Etendard on board France's carriers (created after a navalized version of the Jaguar was cancelled). Nevertheless it remained in service with the Aéronavale until the end of the Cold War and its photo-reconnaissance variant incredibly remains in limited service even today, a remarkable achievement in longevity for this aircraft.

First flown on 21 May 1958 (two years after the original Etendard), the Etendard IVM began production with the Aéronavale in 1960 and entered service two years later. It was rather larger and more powerful than other aircraft in the series, attributes which were necessary for naval operations. A photo-reconnaissance variant was designated Etendard IVP which featured five OMERA cameras replacing the radar and nose cannon. It was still in service by the year 2000. 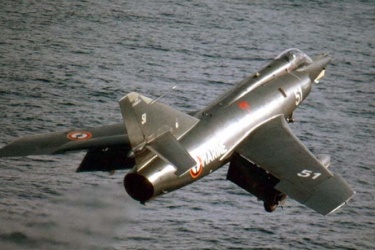