The Aichi E13A 'Jake' was the most widely utilized float plane used by the IJN during the war where it saw action in most major naval battles such the Coral Sea, Midway, and the Solomons campaign. Despite boasting very good range, it was nevertheless very poorly armed and its performance began to suffer once the IJN found itself unable to guarantee air superiority. Still, the E13A was to be found on most major Japanese warships, including heavy cruisers, battleships and seaplane tenders where it was launched via catapults. E13As first saw combat against China in 1941 and was notable for performing vital reconnaissance prior to the Pearl Harbor attack, such was the importance that the IJN attached to this relatively unknown aircraft that it was under production up until the last day of the war and served post-war with the French in Indo-China.

First flown in late 1938, the main production variant of the 'Jake' was the E13A1 which was ordered in 1940 and was under production for no less than four years. Other variants included the E13A1a with redesigned float bracings and improved radio equipment, the E13A1b with a ASV radar (some of these were even fitted with a Magnetic Anomaly Detector for use against submarines), and the E13A1-K dual control trainer. 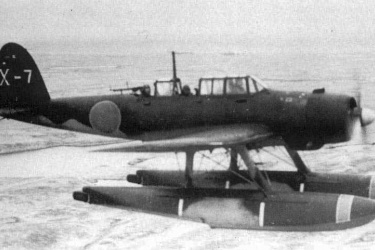