Far and away the finest French fighter of World War II, the Dewoitine D.520, in the hands of a good pilot, was good enough hold its own against the Bf 109E. However, the D.520 was also perhaps the best example of the French aircraft industry's failure to provide the Armée de l'Air with sufficient numbers of good designs: only 36 of these were available when the Blitzkrieg was launched upon the West and only through a massive and unprecedented production effort was a record number of 10 D.520's a day churned out after that. Unfortunately it was too little and too late, and despite a favorable kill ratio, not enough were serviced to tilt the balance of the air war. Overall, the D.520 was living evidence of what could have been accomplished had the French aircraft industry been properly organized before the war, nevertheless production continued in Vichy France and was eventually also used by various Axis air forces. Not surprisingly therefore, the highest-scoring French pilot of the Armée de l'Air, Pierre Le Gloan, shot down a total of 18 enemy aircraft with the D.520.

The D.520 prototype was first flown on 2 October 1938 but the first production aircraft flew over one year later when the war had already started. Many of the surviving D.520s were taken up by Vichy forces in France and Africa where over 400 were in service. On the drawing board were various additional varianst such as the Rolls-Royce Merlin-powered D.521 and the D.524 with Hispano-Suiza 12Z engines but neither of these ever entered production. 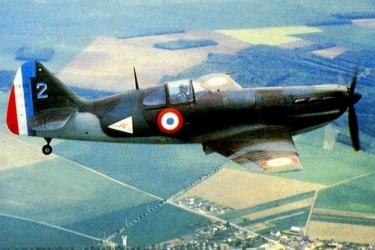