Unique in an industry dominated by turboprop aircraft, the Kawasaki C-1 is one of the few major short-range jet transports flying today. It began as part of a Japanese C-X specification for a transport to replace the US-built C-46 Commando which dated from World War II and was built by a consortium of companies including Mitsubishi, Fuji and Nihon. It was designed in the standard configuration of post-war transports, being a high-wing monoplane with a T-tail, a rear-loading ramp door, and a tricycle landing gear which is retractable into fuselage side fairings. Its twin jet engines are pylon-mounted beneath the wings making it seem like a miniature version of the much larger C-5 Galaxy. Although capable for its intended purpose, the relatively small maximum payload of the C-1 has limited its value (both domestically and for export) compared to other similar aircraft.

The prototype CX-1 had its maiden flight on 12 November 1970 and entered service in 1974 as the C-1. A mid life upgrade during the 1980s resulted in the C-1KA with a redesigned nose and upgraded avionics while an electronic surveillance variant is known as the EC-1. A number were also used for research purposes by Japan's National Aerospace Laboratory and the Japanese Defense Agency. 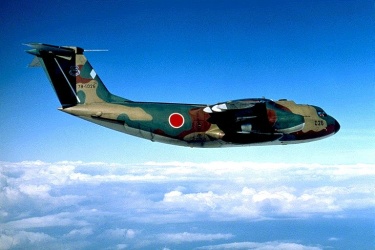