Along with the Zero and the 'Val', the Nakajima B5N 'Kate' formed the backbone of Japan's carrier-borne squadrons when the war began and was by far the best torpedo bomber in the world in 1941, a testament to the soundness of the all-metal stressed skin monoplane design (inspired by similar aircraft by Northrop, Douglas, and Clark) which was well ahead of its time when conceived. The B5N began life as a light bomber but was soon found to be more suitable in the torpedo-bomber role, as such it was first deployed in the war against China usually flying from land bases. Later, over one hundred 'Kates' were used with devastating effect during Pearl Harbor, played a major role in sinking no less than four US fleet carriers during the battles of Coral Sea, Midway, and the Solomons, and continued in service until the battles around the Philippines proved the design outclassed in the face of massive numbers of enemy fighters. Late in the war it was used successfully for maritime reconnaissance and anti-submarine warfare some of which were equipped with ASV radar and magnetic anomaly detectors (MAD).

Designed in 1935, the B5N first flew in January 1937 with the production B5N1 becoming operational against the Chinese shortly afterwards. By the time of Pearl Harbor, the B5N2 with more powerful engines and slimmer cowling had totally replaced the previous variant in service. It was eventually replaced by the B6N throughout 1944 although it remained active as a converted trainer (B5N1-K) and reconniassance dutites in which it was equipped with ASV radar and Magnetic Anomaly Detectors (MAD) for use against submarines. 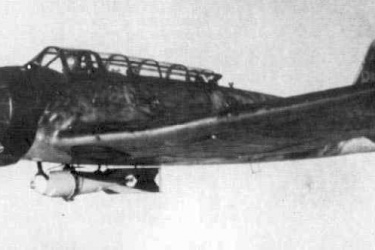