Despite the success of the Puma, it soon became apparent the need to improve its overall performance which eventually led to the Aérospatiale AS 332 Super Puma. Although sharing its predecessor's general layout and function, the Super Puma was notable for its improved powerplant, lengthened nose, high energy absorption landing gear and small ventral fin. Other less apparent changes involved composite rotor blades, damage-resistant transmission, duplicate electric and hydraulic systems, self-sealing fuel tanks and even optional crew armor. This allowed the Super Puma to considerably more survivable and thus more suitable for battlefield roles, mostly as an assault transport but also as a naval helicopter capable of anti-ship, anti-submarine, and search and rescue (SAR) operations. These military variants, operated by over 30 nations around the world (including licence-built units in Indonesia), are now known as the AS 532 Cougar with civilian versions retaining the earlier Super Puma name.

The first attempt to significantly improve the capabilities of the Puma resulted in the AS 331 with production soon switching to the more advanced AS 332 which first flew on 13 September 1981. The initial military transport version was the AS 332B (with a civil equivalent known as the AS 332C) which was eventually upgraded into the AS 332M with a lengthened cabin for increased loads. More recent versions include the AS 332L1/L2 with composite rotor blades and a strengthened fuselage. Finally, a navalized version optimized for ASUW, ASW, and SAR missions was also known as the AS 332F. Eventually, all military versions were renamed and redesignated as the AS 532 Cougar which included the earlier AS 332B (AS 532UC), AS 332M (AS 532UL), and AS 332F (AS 532MC) as well as new-build variants such as the AS 532AC (short fuselange) and AS 532AL (long fuselage) armed assault variants and the AS 532SC (short-fuselage) type for naval use. The latest versions are the civil EC 225 and military EC 735 with FADAC engine systems, a full glass cockpit, and a five-blade rotor. 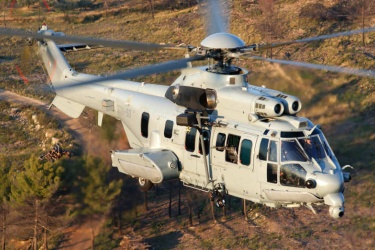