Without a doubt the Mitsubishi A6M Zero was the most famous Japanese aircraft of the war, a true aviation legend which owned the skies over the Pacific for the first year of the conflict and remained the most significant menace to Allied pilots afterwards. The Zero was significant in being the first carrier-borne fighter to prove superior to most land-based ones, and its effectiveness came as a surprise to the US and Britain who typically regarded anything non-Western as inferior. Yet nothing in their arsenals could take on the Zero during 1941/42 and it was only with the introduction of the P-38, the Corsair, and especially the Hellcat that the tide began to turn after 1943. The Zero was incredibly agile, it could typically out-turn any enemy aircraft but had a major weakness in poor armor protection coupled with a lack of self-sealing fuel tanks which made it extremely fragile against the more rugged US fighters. Pilot losses during Midway and the Solomon Islands campaigns also hampered the effectiveness of the Zero later in the war but it still remained a constant threat until the very end, flying in every major naval and land battle throughout the breath of the Pacific and even being used as kamikazes during and after the battles in the Philippines in late 1944. The Zero was also the most widely produced Japanese aircraft of the war and flown by no less than Japan's top four aces: Nishazawa (87 kills), Iwamoto (80 kills), Sugita (70 kills) and Saburo Sakai (64 kills).

The prototype A6M1 was first flown on 1 April 1939 but proved underpowered. The first production variant was the A6M2 which had an improved engine and it served during the initial campaigns in the Pacific including the attack on Pearl Harbor where 135 were avilable for fighter cover. By late 1942 its shortcomings began to become evident so it was decided to improve its powerplant. The result was the A6M3 which was not particularly popular with its crews and only a marginal improvement over the previous model, it came with both long and short span folding wing tips (Model 32 and Model 22 respectively). The ultimate version of the Zero was the A6M5 which reverted to the shorter wing but featured longer range, progressive armament and armor protection in the Model 52b, and even self-sealing fuel tanks in the Model 52c. Overall it was the most widely produced Japanese aircraft of the war and was also used as kamikazes beginning in the Battle of Leyte Gulf. Of the last versions of the basic Zero only one was ever produced in quantity, this was the A6M7 optimized for fighter-bomber missions while the A6M6 equipped with a water-methanol engine and the A6M8 with the powerful Kinsei 62 engine flew only as prototypes. Non-fighter variants included the two-seat A6M2-K and A6M5-K trainers some of which were used as kamikazes and the A6M-2N 'Rufe' floatplane with a large central float and two smaller outriggers. These were designed and built by Nakajima. 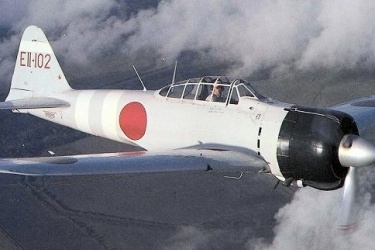