Predecessor to the fearsome A6M Zero, the Mitsubishi A5M 'Claude' was one of the best pre-war carrier-borne fighters and performed admirably during the war against China and later against the Soviet Union during the border incidents of 1939. The A5M was a cantilever monoplane, the first to see service with the IJN, and featured a fixed undercarriage as well as an an open cockpit due to to pilot preference at the time; it was still in service by the time of Pearl Harbor (being the numerically most important fighter in the IJN arsenal at the moment) and although overshadowed by its famous successor was used effectively against equally obsolete aircraft fielded by the Allies in the opening months of the Pacific war. Nevertheless, after Japan's initial campiagns the A5M was relegated to secondary roles with surviving aircraft ending up as kamikazes.

The prototype Ka-14 was first flown on 4 February 1935 and surprised everyone by surpassing all expectations in performance, notably over 50 mph in speed above its specification as well as a faster climb rate. Unlike subsequent production versions, the prototype featured inverted gull wings, but these were modified into straight wings for the A5M1, the first variant to enter service in 1937. This was followed by the A5M2a with a more powerful engine and the A5M2b with a three-bladed propeller and the ability to carry underwing bombs or drop tanks. The A5M3 was an experimental version with a Hispano-Suiza engine and hub-firing cannong but never entered production. Lastly, the final definitive variant was the A5M4 and incorporated increases in power, range and bomb loading capacity. A tandem two-seat trainer was designated A5M4-K. 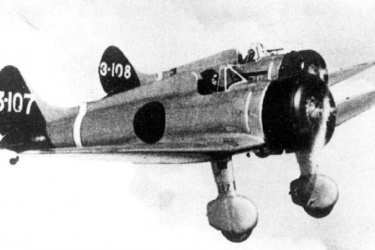