The Kawasaki OH-1 (nicknamed Ninja) is Japan's first indigenous observation/combat helicopter intended to replace the older, local-built US OH-6. Although designated as an observation helicopter, the OH-1's design more closely resembles that of a conventional gunship on account of its narrow fuselage, stepped tandem cockpit, crew protection armor, and prominent stub wings which can carry a variety of stores, primarily air-to-air missiles for self-defense. It's other notable structural feature is a Fenestron ducted fan anti-torque tail while avionics include a targeting system involving FLIR, TV, and laser ranging systems. Although the total size of the project has been scaled down due to budget cuts, the OH-1 is slowly being introduced to the Japanese Ground Self-Defense Force with the possiblity of a dedicated attack variant being developed to replace the AH-1 Cobra.

First flight of the Mangusta took place on 15 September 1983 with deliveries beginning in 1990 to the Italian Army as the A 129. A version designed exclusively for export was known as the A 129 International and features more powerful LHTEC engines in place of the earlier Piaggio-built Rolls-Royce Gem as well as a five-bladed rotor, wider choice of weaponry, and a fixed nose-mounted gun. An upgraded version for Italian service is the A 129 CBT with most of the improvements in the International albeit with the earlier Gem powerplant. 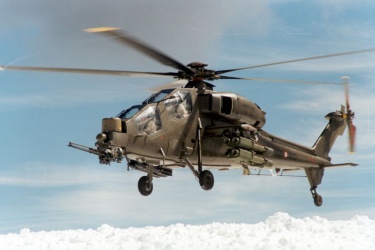