Similar in design to the larger French Dauphin or the British Lynx, the Agusta A 109 Hirundo (Swallow) is a general-purpose helicopter used for land, naval, and patrol duties. Like the Dauphin, the Hirundo has a sleek yet ample fuselage with a flat belly and retractable landing gear, and is powered by FADEC controlled twin-turboshaft engines driving a four-blade rotor. It was designed originally as a light utility transport but has since been shown to be highly versatile and capable of satisfying a diverse range of missions thanks to advanced avionics such as a glass cockpit and night vision goggles as well as a wide selection of armament including guns, rockets, and missiles which can be mounted on optional wing stubs. The A 109 has found tremendous success in export markets and is currently in military and civil service with over a dozen countries including the United States and license-built in China by Changhe.

First flight of the A 109 took place on 4 August 1971, entering service with the Italian Army as the A 109A Hirundo and having the distinction of being the first indigenously designed twin-engined helicopter. The wide-bodied A 109A Mk. II was eventually adapted for light attack missions and other battlefield roles although true military versions began with the A 109 EOA observation platform and the A 109CM and A 109K light attack types, the latter which came in both land-based (A 109KM) and shipborne (A 109KN) versions with ASUW capabilites. Finally, the A 109E Power has a significantly modernized cockpit and various fuselage improvements leading to a USCG version called the MH-68A Enforcer used for counter-narcotics operations. 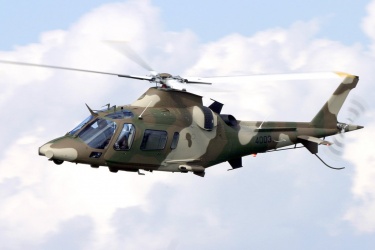