The 40M Turán was a Hungarian medium tank developed in the late 1930 which ended up becoming one of the most widely used armored fighting vehicles of a minor Axis army during World War II. The Turán was developed in cooperation with Czechoslovakia's Škoda Works and based on a follow up to the LT-35 tank, sharing a similar layout, notably the leaf spring suspension with two bogies. However, the hull of the Turán was slightly longer and the other most prominent change was the use of a locally-designed 40-mm gun in place of the LT-35's 47-mm gun. The smaller caliber was to be compensated by higher muzzle velocity giving it similar penetration power. Frontal armor was also thicker and the resulting tank was around 80% heavier than the LT-35 yet still managed to outpace and outrange it thanks to a considerably more powerful engine. Early experiences on the Eastern Front resulted in a new version of the tank being equipped with a 75-mm field gun although this had only limited penetration power against the Soviet T-34 or KV-1. The Turán went on to serve with Hungary's two armored divisions until the Hungarian surrender, with a few captured vehicles operated by Romania.

The 40M Turán was developed from the T-21 and T-22 Škoda prototypes, the latter which was sent to Hungary for development into the Turán. The installation of a 75-mm 41M field gun (based on the older 18M gun) resulted in the 41M Turán II (classifed as heavy tank) upon which the original model was retroactively designated Turán I. Plans to equip the tank with a 75-mm 43M tank gun resulted in the 43M Turán III but only prototypes were built. An assault gun known as the Zrinyi was also developed from the Turán but is described separately. 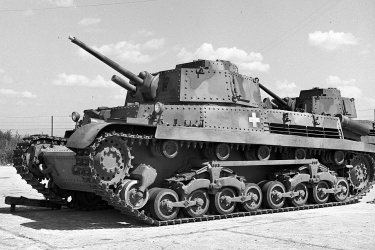