The Sisu XA-series (nicknamed Pasi) is a family of 6 x 6 APCs desigend by Susi (later Patria) for the Finnish Army but which have seen substantial export success, most notably among the Nordic countries which have all adopted it. The XA-180 features a conventional wheeled APC design made of all-welded steel armor with the driver and commander seated in the front, the engine compartment behind them to the left, and the troop compartment at the rear. Access to the troop compartment, which carries up to 10 troops, is via two rear doors and there are vision blocks and firing ports on both the sides as well as the rear. The roof of the vehicle features a mount that can fit a 12.7-mm machine gun. Initial XA-series variants fully amphibious and can move through the water via two propellers under the real hull, while a trim vane is provided for buoyancy. However, various later variants with upgraded armor had their amphibious capability removed. Aside from the basic APC variants, the XA-series has been used for numerous other combat support roles including command posts, artillery observation, and armored ambulance. Aside from the Finnish Army, the XA-series has been adopted by Denmark, Estonia, the Netherlands, Norway, and Sweden. Additionally, it has been leased by UN forces and also used by Austria and Ghana for UN service. It has seen action in Afghanistan as well as numerous conflict zones in Africa and the Middle East.

The first prototype of the XA-180 was completed in 1982, this being the initial baseline vehicle. It would later receive a mid-life upgrade resulting in the XA-180M. The XA-181 and XA-182 are target acquisition radar versions. Estonian versions are known as the XA-180EST and serve in various roles besdies APC. The next major variant in the series is the XA-150 with improved engine and transmission. These have been developed for numerous roles besdes APC, including ambulance, command pose, surveillance radar, recovery vehicle, and anti-tank (armed with TOW missiles). Perceived weaknesses in armor protection resulted in the XA-186 with additional armor that comes at a cost of amphibious capability (a Norwegian version is known as the XA-186NO while a similar Dutch version is the XA-188). Finally the XA-200-series is a further development with even greater armor protection against projectiles of up to 14.5-mm, but also without amphibious capability. This includes the XA-203 APC version as well as the XA-202 command, control, and communcations vehicle. Swedish variants are known as the XA-180S and XA-203S or by their local designations of Patgb 180 and Patgb 203 (Pansarterrängbil) respectively; some of the latter are armed with 20-mm autocannon. 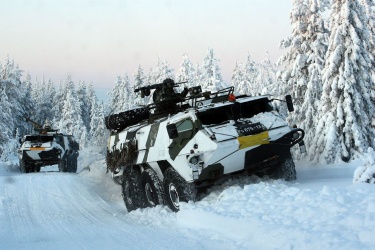