The Panzer 68 (Pz 68 was the second among Switzerland's line of domestically produced main battle tanks, serving during the latter half of the Cold War. The design was an evolution of the earlier Pz 61 retaining the same conventional arrangement and a characteristic single-piece cast rounded turret. The Pz 68 retains the Swiss-built modified version of the popular British L7 105-mm gun which can fire a number of domestic and foreign ammunition types, but unlike the Pz 61 it is stabilized which allows firing on the move. Secondary armament includes two 7.5-mm machine guns, but lacks the coaxial gun of its predecessor. The powerplant is also a slightly more powerful version of the same Swiss-made German MTU diesel, coupled to a domestically designed semi-automatic transmission. The engine is separated by a fireproof bulkhead and the entire power pack can be removed in an hour. The Pz 68 lacks amphibious capability and only basic fording but includes NBC equipment; however, this was later found to be deficient, which along with other equipment issues caused doubts over the tank's combat readiness and contributed to the scuppering of any export interest. Despite upgrades to keep it viable in the post-Cold War era, the Pz 68 was phased out of Swiss service in the early 2000s in favor of a Swiss-built version of the German Leopard 2 (known as the Pz 87).

Development of the Pz 68 began in the 1960s and was a lineal descendant of the earlier Pz 61, it entered service as the Pz 68 Mk 1. A few minor additions including a thermal sleeve was added in the Mk 2 while a larger turret was provided in the Mk 3 (also known as Pz 68/75) and Mk 4. The Pz 68/88 conversion resolved many of the equipment issues that plagued earlier versions and also included a new fire control system. Other non-tank variants inlcude the EntpPz 65 armored recovery vehicle, the Brückenlegepanzer 68 bridgelayer, while anti-aircraft and self-propelled gun versions were proposed but not put into service. 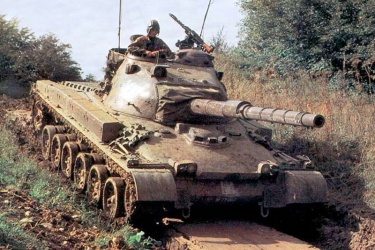