The Panzer 61 (Pz 61) was Switzerland's first attempt at building an indigenous tank design, given the difficulties in sourcing an acceptable successor to the British Centurion tanks then in use by the Swiss Army. The Pz 61 features a cast hull and turret, entirely produced in Switzerland, in a conventional arrangement with the driver at front, and a large, rounded three man turret. The turret houses a Swiss-built version of the British L7 105-mm gun which can fire APDS, HE, and HESH rounds. Secondary armament includes a powerful 20-mm coaxial gun, as well as a smaller caliber 7.5-mm gun mounted on the loader's hatch for anti-aircraft use. The powerplant is also externally source, using a German-made MTU diesel engine, while the suspension uses Belleville washers for the six road wheels. NBC protection is afforded, however, the Pz 61 is not amphibious although it is capable of some limited fording. The relatively simple design proved successful and the Pz 61 was used as the basis of the Pz 68 which was designed the following decade. Despite the existence of a more advanced successor, the Pz 61 soldiered on until finally retired in the early 1990s by which time the Pz 87 (Leopard 2) had been put into service, thus ending Switzerland's short run of indigenous main battle tank design. No export orders were recieved.

Development of the Pz 58 began in the 1950s, with the first two prototypes built in 1958 mounting either a 90-mm or a 20-pdr (83.4-mm) gun. A number of pre-production vehicles were built before the first production Pz 61 were ordered. No variants were built, before production switched to the Pz 68 which retained many of the same features and components (including the gun and a revised engine) of the Pz 61. 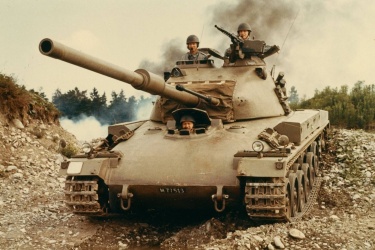