The Patria AMV is a family of modular wheeled 8 x 8 fighting vehicles that were developed following the experience of success of the earlier XA-series. The AMV features an all-welded steel hull with the driver at the front left, the engine compartment front right, and the troop compartment in the rear. The hydropneumatic suspension is height-adjustable and various roof heights are available enabling it to serve more effectiveless as a command post or armored ambulance. For combat vehicle variants, a weapons station is located in the center of the vehicle and can be configured with numerous turret and armament types, these usually consisting of 25-mm or 30-mm autocannons in the basic IFV model, but can also be fitted with more powerful weapons such as twin-barreled 120-mm mortars mounted on an AMOS turret, either 105-mm or 120-mm guns for the tank destroyer role, as well as anti-tank missiles. The modular nature of the AMV allows many other elements of the vehicle to be customizable in order to increase its export appeal. Despite the somewhat saturated market for wheeled APCs and IFVs, the AMV has managed to carve out an important niche thanks to its modular nature as well as excellent protection of up to 30-mm in the frontal arc. Export customers include Croatia, Poland (with over one thousand vehicles), Slovakia, Slovenia, South Africa, Sweden, and the UAE. Polish units have seen action in Afghanistan and UAE units have also been employed in Yemen.

First prototype of the AMV was completed in 2001 and entered service with the Finnish Army as the XA-360. Three main versions of the vehicle are in production, the standard type being the AMV Basic Model which is optimized for APC/IFV roles, as well as reconnaissance, ATGM platform, and mortar carrier, as well as various engineering vehicles. The AMV High Roof Model has additional space in the troop compartment for use as a command vehicle, armored ambulance, or workshop vehicle. The AMV Heavy Weapon Platform is optimized for mounting large-caliber weapons including the 120-mm AMOS mortar system (known as the XA-361 in Finnish service) or 105- and 120-mm guns in the tank destroyer role. The AMV XP adds extra payload and protection. License-built Polish vehicles are known as the KTO Rosomak ('Wolverine') while a license-built South African version is known as the Badger ICV, which can be configured with four different turret types which include autocannon, mortar, and missile versions. 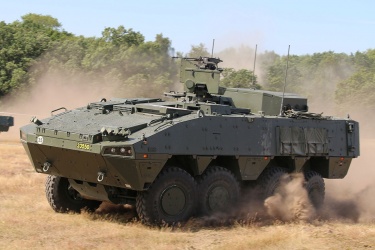