The Marmon-Herrington series of armoured cars were developed in South Africa for use with the Union Defence Force in the pre-war period. Despite the name, US-based Marmon-Herrington only produced the drive trains for the vehicles, while the chassis was developed by Ford, armor plates by ISCOR and final assembly undertaken by Dorman Long in South Africa. Initial variants had riveted hulls, a 4 x 2 drive, and were armed with only twin Vickers machine guns. However this was seen as insufficient for modern combat conditions and were subsequently improved in later marks to have 4 x 4 drive and heavier armament. This varied between marks and even among marks, with the heavier weapons including Boys anti-tank rifles and even 2-pounder guns. A large number of captured armament was also fitted, including various Breda machine guns from Italy, and 2.8cm and 3.7cm anti-tank guns from Germany. Performance gradually improved over the course of the vehicle's development, serving not only with the South African Armoured Corps but also with a large number of Commonwealth and Allied armies including Belgian, Dutch East Indies, Free French, Greek, Indian, Polish, and New Zealand forces (the British Army itself used a small number as well). They mostly served in the North African campaign and a small number in Malaya, with some remaining vehicles sent to Transjordan where they also fought in the 1948 Arab-Israeli War and also by the Cypriot National Guard during the 1974 Turkish invasion.

Development of what would become the Marmon-Herrington Armoured Car began in 1938 entering service as the Mk I in 1940. Domestically, it was known as the South African Reconnaissance Vehicle, the Marmon-Herrington name being given by the British Army. Inadequate performance of the initial variant led to the development of the Mk II (the first mass-produced version) with four-wheel drive and with some vehicles armed with Boys anti-tank rifles. The Mk III was a more substantial redesign with a larger turret and an improved chassis and hull. By far the most radical resdesign was the Mk IV which had a completely redesigned hull and all mechanical components attached to it rather than the chassis. The turret was also enlarged to carry a 2-pdr gun, although many retained only the machine gun armament. The Mk IVF was similar, but used chassis components from Canadian-built Ford F60L trucks due to a shortage of Marmon-Herrington components. Prototypes of the 8-wheeled Mk V and Mk VI which could be armed with 6-pdr guns never entered production. 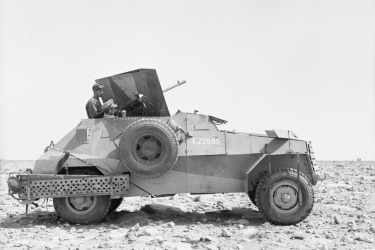