The Stryker family of vehicles is yet another derivative of the successful Swiss MOWAG Piranha and Canadian LAV III APCs, and since its introduction in 2006 has gradually turned into the backbone of the US's new mobile formations known as Stryker brigades. The Stryker is an 8 x 4 (selectively 8 x 8) APC which shares as strong visual resemblance to the LAV-25, used by the US Marine Corps. It was designed for being both easily deployable but also having the necessary protection to be highly survivable under most combat conditions. Among the Stryker's most innovative features is its advanced battlefield information system which provides communication with other vehicles as well as the battalion. Its modular design also enables it to be fitted with numerous different weapons configurations and turrets. Various armor configurations are available, including bolt-on ceramic armor that can protect against 14.5-mm rounds all around, as well as slat armor and armored skirts for use against IEDs. Aside from that, the Stryker's design is conventional, featuring a rear troop compartment that can carry up to nine infantrymen but it lacks amphibious capability and cannot be airlifted from C-130s while fully equipped or with the extra armor. Strykers have been used extensively in Iraq since 2003, and were later deployed to Afghanistan as well. Despite occasional criticism, performance has been highly praised by its crews.

The Stryker began as a variant of the Canadian LAV III, which was ultimately awarded a production contract in 2000. The basic infantry transport is known as the M1126 ICV (Infantry Carrier Vehicle) and is equipped with a 12.7-mm M2 Browning gun on a Protector remote weapons station. The M1127 RV (Reconnaissance Vehicle) is designed for RSTA troops which are generally composed of three recce platoons (each with four vehicles). Armament is similar to the M1126 but carries a four- to six-man scout squad. The M1128 MGS (Mobile Gun System) features a 105-mm M68A2 gun thereby adding significant firepower to each Stryker brigade, while the M1129 MC (Mortar Carrier) is armed with Soltam K6 120-mm mortars (some with 60-mm or 81-mm mortars carried for dismounted use) and the M1135 ATGM (ATGM Vehicle) carries TOW missiles to provide anti-tank capability to infantry and recce units. Non-combat vehicles include the M1130 CV (Command Vehicle), M1131 FSV (Fire Support Vehicle), M1132 ESV (Engineer Squad Vehicle), M1133 MEV (Medical Evacuation) and M1135 NBC RV (NBC Reconnaissance Vehicle). 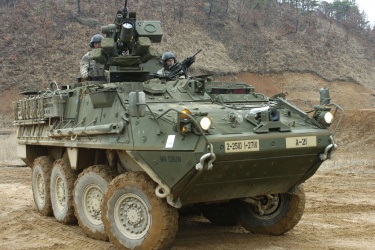