The HWK 10 was a series of tracked fighting vehicles built for export by Germany's Henschel-Werke and which in the event were only purchased in limited quantities by Mexico, whose defense secretariat (SEDENA) had considerable input in the design. The HWK 11, which was the designation for the basic APC version features an all-welded hull with a conventional layout of the driver and commander in the front left, and the engine on the right. The engine is a gasoline-powered Chrysler 75M which is the same as that used in the US M113. Armament typically consists of a 7.62-mm machine gun mounted on a small French-designed turret. The troop compartment is located in the rear and can carry as many as ten infantrymen, who enter and exit through two rear doors (two roof hatches are also provided). Three of the wheel pairs have hydraulic shock absorbers and the tracks can be fitted with rubber pads. Neither NBC nor amphibious capability is provided. Despite plans to procure as many as 350 vehicles, only a few dozen were ever license-produced although they have been constantly upgraded and remain in service with the Mexican Army today.

The first prototypes were built in 1963 with production vehicles in service the following year. The HWK 11 is the basic APC version while the HWK 13 is a reconnaissance vehicle with a turreted 20-mm cannon and engine compartment at the rear. These are the only two versions that were produced. Other proposed members of the family include the HWK 10 ATGW carrier, HWK 12 tank destroyer with a 90-mm gun, HWK 14 mortar carriers (81-mm and 120-mm), HWK 15 command vehicle, and HWK 16 armored ambulance. 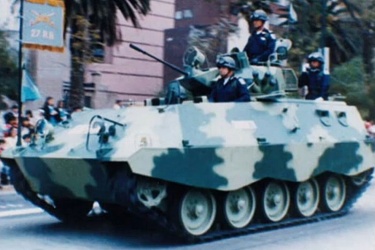