Developed simultaneously with the EE-11, the EE-9 Cascavel (rattlesnake) has numerous shared components with its APC counterpart but is a dedicated reconnaissance armored car. The EE-9 is of all-welded construction with protection against small arms as well as extra protetion against other close range weapons like grenades and Molotov cocktails. Layout is conventional with the driver on the left and the engine at the rear. Like the EE-11, the EE-9 features different engine configurations depending on the variant, and also uses ENGESA's proprietary 'Boomerang' suspension which consists of a rigid axle and two lateral walking beams. Armament varies, with initial vehicles using leftover turrets from M3 Stuart tanks, followed by a Hispano-Suiza turret and finally, an ENGESA ET-90 turret armed with a locally-built 90-mm Cockerill gun; secondary armament consists of either 12.7-mm or 7.62-mm machine guns. The EE-9 became another export success, serving not only with the Brazilian Army and Marines but with nearly two dozen other countries, mostly in Latin America, Africa, and the Middle East of which the main users were Colombia, Cyprus, Iraq, and Libya. Libyan units saw action against Egypt and Chad, while Iraqi vehicles saw combat during the Iran-Iraq war. Zimbabwean vehicles were also used in Mozambique and Congo.

The first prototype of the EE-9 was produced in 1970, around the same time as the EE-11. There are seven major variants which are mostly distinguished by their engine configurations: the Mk II, Mk III Mk V, and Mk VI being equipped with Mercedes-Benz diesels, and the Mk IV with a Detroit Diesel engine (the Mk 1 was never produced). Variants also differ in terms of their transmission as well as their central tire-regulation system which is onyl avialable in some versions. 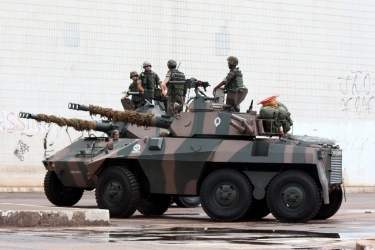