Without a doubt the most successful Latin American armored fighting vehicle ever, the EE-11 Urutu (named after a South American viper), has been a popular APC adopted not only by Brazil but by around 30 other nations, mostly in Latin America and the Middle East. It shares many components of the company's earlier EE-9 armored car, and incorporated a number of commercial systems that help keep the vehicles viable even after ENESA went bankrupt. The hull is of all-welded steel which affords protection against small arms and shell splinters. Layout is conventional with the driver at the front left and the engine on the right. Engine varies depending on variant, and can be either Detroit Diesel, Mercedez-Benz, or Chyrsler models. To the rear is the troop compartment which can carry up to twelve infantrymen which can be provided with up to 11 firing ports as well a number of vision blocks. Armament consists of a 12.7-mm M2 machine gun but various other weapons can be fitted including larger caliber turreted cannon and mortars. Another unique aspect of the EE-11 is the 'Boomerang' suspension for the rear axle, with walking beams and a differential locking system. From the start, the EE-11 was meant to be amphibious but a specialized version for service with the Brazilian Marines features twin propellers and rudders for use even in rough seas. Other options include night vision equipment and an NBC system. The EE-11 remains in service with Brazil although it is in the process of being replaced b the VBTP-MR. It has been extensively exported and used in combat by Libya as well as during the Iran-Iraq war by both sides.

The first prototype for the EE-11 was produced in 1970 with production for the Brazilian Army beginning four years later. Vehicles were offered with numerous ENGESA-built turrents for Oerlikon cannons of 20-mm and 25-mm caliber as well as locally-built 90-mm guns. APC versions came in seven different variants of which the Mk I, Mk II, Mk V, and Mk VI came with Mercedez-Benz engines, and the Mk III and Mk VII with a Detroit Diesel engine. Other non-APC versions include an 81-mm mortar carrier, armored ambulance, cargo vehicle, command vehicle, recovery vehicle, riot control vehicle, and an AFSV amphibious armored fire support vehicle with an ET-90 turret mounting a 90-mm gun. 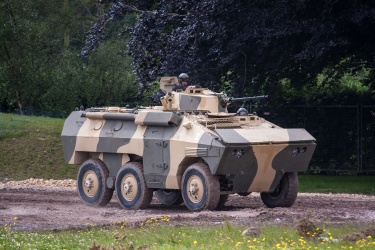