The Bionix IFV is a family of Singaporean infantry fighting vehicles that is notable for being the first major AFV designed and produced in a Southeast Asian country. It was designed to complement the country's M113 fleet with a more combat-capable vehicle and the decision to produce it indigenously followed evaluation of numerous Western IFVs that did not end up meeting the operational requirements of the Singapore Armed Forces (SAF). The Bionix features an all-welded steel hull with the driver seated at the front left and the engine compartment to the right. The streamlined hull features modular MEXAS-designed armor with the ability to have additional appliqué armor fitted as needed. It is powered by a 550-hp Detroit Diesel engine which can be removed in as little as 15 minutes. The troop compartment is located in the rear with access via a power operated ramp as well as a roof hatch, and with two roof mounts for a 7.62-mm machine gun each in place of firing ports found on other IFVs. The turret houses an M242 Bushmaster 25-mm autocannon, the same used on the US M2/M3 Bradley, as well as another coaxial 7.62-mm machine gun although unlike the Bradley, no anti-tank missiles are equipped. Alternatively, version of the Bionix with a local CIS-designed 40-mm grenade launcher and 12.7-mm heavy machine gun in a smaller, one-man turret is also available. The Bionix is not amphibious and NBC protection is optional. The Bionix is currently in service only with the SAF and is set to be complemented by the Hunter IFV currently under development.

Development of the Bionix IFV began in 1991 with the first prototype completed sometime during 1995-96. Two main versions of the IFV have been built which share the same basic hull design. The first is the Bionix 25 which is equipped with the M242 Bushmaster autocannon in a two-man turrent and with a troop-carrying capacity of seven. The second is the Bionix 40/50 which features a 40-mm grenade launcher in a smaller one-man turret and with troop capacity increased to nine. And improved version later entered service as the Bionix II with a 30-mm Bushmaster II autocannon, upgraded armor, and a digital battlefield management system. Non-IFV variants include the Bionix ARV armored recovery vehicle, Bionix AVLB armored bridgelayer, and Bionix CMV Trailblazer counter-mine vehicle. 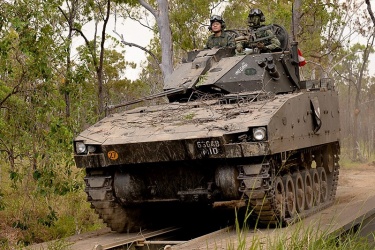