A common requirement for a modern IFV resulted in the formation of the Austrian Spanish Co-Operative Development (ASCOD) joint venture between Steyr-Daimler-Puch (Austria) and Santa Barbara (Spain). The result was the Pizarro / Ulan, which is made of all-welded steel with protection of up to 14.5-mm rounds in the frontal arc, as well as protection from small arms fire throughout both hull and turret, plus anti-tank and anti-personnel mines. Modular armor add-ons can also be installed to provide it even further protection even up to 30-mm rounds, while Spanish vehicles also come with ERA. Arrangement of the hull is conventional, with the driver at the front left and engine (which varies by country; Austrian vehicels featuring a more powerful 721-hp MTU 8V 199) at the right. At the rear is a troop compartment that can fit up to eight infantrymen with a cupola for the squad leader. Armament consists of a turret-mounted Mauser 30-mm autocannon and a 7.62-mm coaxial machine gun. A sophisticated digital fire-control system is provided, plus a thermal night sight and laser rangefinder. Other equipment include NBC protection, air conditioning, and night vision. Non-IFV versions are also in service or have been offered including a light tank and a self-propelled howitzer. The Pizarro is in service with Spain and the Ulan in Austria. The vehicle is also the basis for the upcoming Ajax scout special vehicle that will be in use with the British Army.

The initial prototype was built in 1990 followed by three more prototypes during the rest of the decade. The Pizarro is the standard Spanish version and comes in the standard VCI/C IFV, the VCPC command vehicle, VCOAV advanced reconnaissance vehicle, VCREC recovery vehicle, and VCZ engineer vheicle. The LT-105 is a light tank version geared for export and which can be equipped with numerous turret configurations and has been selected for service with the Royal Thai Marine Corps. The Donar is a 155-mm howitzer based on the KMW AGM. 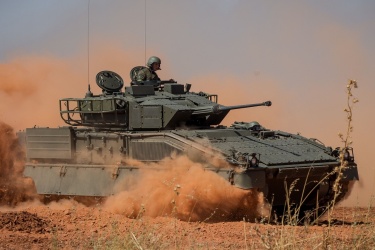